Methods: As the previously published priorities were grouped under seven different domains, a working party with at least two European experts was created for each domain to review all the priorities under that domain. A structured review form was developed to standardize the review process. The group conducted an extensive literature search relevant to each of the priorities and then graded the priorities into three categories: (1) no longer a priority (well-designed trial, incorporated in national/international guidelines or adopted in routine clinical practice); (2) re-mains a priority (i.e. the above criterion was not met); (3) redefine the existing priority (i.e. the priority was too vague with the research question not clearly defined).

Results: The previous ESGE research priorities document published in 2016 had 26 research priorities under seven domains. Our review of these priorities has resulted in seven priorities being removed from the list, one priority being partially removed, another seven being redefined to make them more precise, with eleven priorities remaining unchanged. This is a reflection of a rapid surge in endoscopic research, resulting in 27% of research questions having already been answered and another 27% requiring redefinition.

Conclusions: Our extensive review process has led to the removal of seven research priorities from the previous (2016) list, leaving 19 research priorities that have been redefined to make them more precise and relevant for researchers and funding bodies to target. 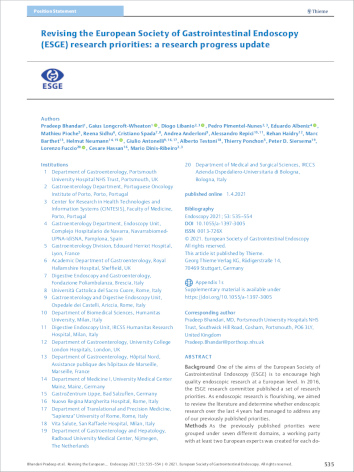