Many countries in Europe are now introducing screening for colorectal cancer [1]. This considerable investment adds to national economic burdens and must be audited to demonstrate that it is cost-effective, well-targeted and of high quality. Spending more money, having more doctors, admitting more patients or having a nearby “center of excellence” does not necessarily result in improved outcomes.

The provision of healthcare services is most effective when delivered in an organized and coordinated way [2]. Ad hoc screening for breast and cervical cancer has been shown to be less efficient and poorer value for money compared with screening delivered by an organized cancer screening program [3] [4] [5] [6] [7] [8] [9] [10] [11] [12].

The International Agency for Research on Cancer defines an organized cancer screening program as having: (i) an explicit policy with defined methods including screening intervals; (ii) a clearly defined target population; (iii) a management team for implementation and to monitor uptake; (iv) a clinical healthcare team to decide on clinical matters; (v) a detailed quality assurance program; and (vi) a method for identifying cancer occurrence and death in both the target and the background populations [13].

Until recently, the only method of screening which had been tested in randomized prospective studies was the guaiac fecal occult blood test (FOBT) [14] [15] [16] [17] [18]. This screening method is therefore the only one that is recommended by the European Union [19]. Several European countries now have a FOBT-based organized screening program in place (Finland, France, Italy, Czech Republic, and the United Kingdom) and further countries are planning to introduce such a program. Several trials of flexible sigmoidoscopy have been recently reported or are due to report soon [20] [21] [22]. 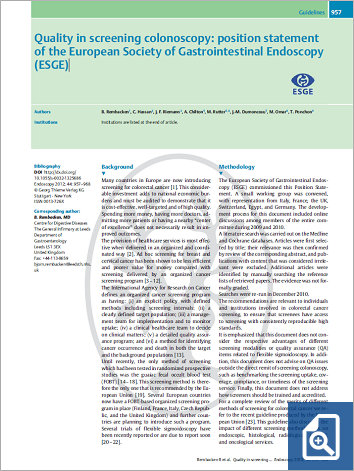