2 We suggest primary involvement of an anesthesiologist in patients of ASA class ≥3, with a Mallampati’s class ≥3 or other conditions that put them at risk of airway obstruction (e.g. pharyngolaryngeal tumors), in patients who chronically receive significant amounts of narcotic analgesics, or in cases where a long-lasting procedure is anticipated (weak recommendation, low quality evidence).

9 Minimum discharge criteria should be fulfilled before discharging a patient.We recommend that patients who have received combined regimens, and all patients of ASA class >2, should upon discharge be accompanied by a responsible person and refrain for 24 hours from driving, drinking alcohol, operating heavy machinery, or engaging in legally binding decisions. Advice should be provided verbally and in written form to the patient, including a 24-hour contact phone number (strong recommendation, lowquality evidence). 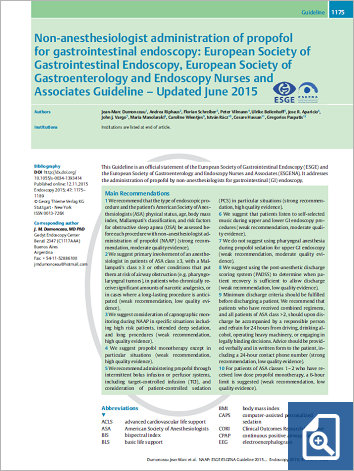