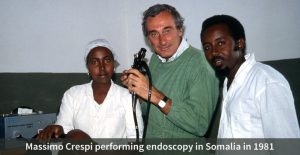 A teacher who has contributed to the development of modern medicine, science and humanity

I met Massimo Crespi in 1968 and I began, because of him, to be interested in digestive endoscopy. We organized the 2nd World Congress of Digestive Endoscopy in 1970 in Rome. From this date on we continued to work together in expanding this technique first in Italy and then all over the world. He was a real leader plenty of good ideas and I learned a lot from him.

We started to be involved in the ESGE very early and his brilliant ideas contributed enormously to give a rational setting to the OMED (now WEO) in order to expand his concepts using digestive endoscopy in cancer prevention. He was a man with clear ideas in mind to help humanity by preventing some digestive diseases. He believed this and at a very young age, he visited many underdeveloped countries in order to study the precancerous lesions of the oesophagus, stomach, colon and rectum. In the seventies and eighties he went to North Iran, China, Thailand, North (Somalia, Libya, and Tunisia) and Central Africa making live demonstrations obtaining very important results reported in the Major G.I. Congresses in Europe, Asia and America.

He was involved in the most important Scientific Gastroenterology Associations being also one of the Founding Member of the UEGF (now UEG) of which he was Chairman for one year; President of the ESGE for 4 years; President of the OMED (now WEO) for 2 years. Secretary General of the MTCC (Mediterranean Task Force for Cancer Control).

Massimo was an extraordinary man a scientist leader in his field, loyal, sincere and international diplomat. As a colleague he was honest and an outstanding collaborator to work with.

During 50 years of collaborating we became very good friends and it will be impossible to forget a person with his qualities. His “joie de vivre”, his love for nature especially the sea with his precious boat made his life happy and satisfied.
May his soul rest in peace!

The Curriculum Vitae of Professor Crespi