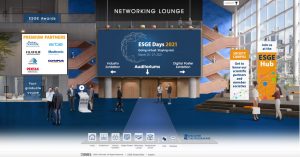 ESGE’s first virtual congress took place on March 25-27, 2021.   Despite challenges from the Covid 19 pandemic, thanks to our dedicated Scientific Committee and modern technology, participants could come together to share endoscopic education, innovation and inspiration.   Feedback has been overwhelmingly positive!

Participants of ESGE Days 2021 entered an immersive platform where they could explore an auditorium, with 6 virtual rooms streaming live content, an Industry Exhibition, a Networking Lounge where Meet the Experts and EYE Zone sessions were held, plus much more.

In total there were 3024 registrations, an increase of 222 participants from ESGE’s last face to face congress in 2019.   Two thirds of participants were male and a third were female.   Participants were mainly Gastroenterologists/Endoscopists (91%).   There were over 140 scientific sessions and 233 free paper sessions.

ESGE Days 2021 had 200 faculty members from 37 countries.   The country with the most attendees was Spain, followed by Germany, Italy, Portugal, Norway, Mexico, United Kingdom, Greece, France and the Czech Republic.

Scientific abstracts formed the backbone of the congress. 781 abstract submissions were received from 53 different countries.   4 investigators had their abstracts selected as  the top abstract, and presented their work in the opening plenary session, plus 60 investigators were awarded an Abstract Grant.

A full and varied programme

Alongside the scientific programme and industry symposia a number of award winners were also announced and honoured at ESGE Days 2021.   Short films were made about the winners of both the ESGE Innovation of the Year Award and the ESGE Medtronic AI Research Award which were screened at the Awards Hub.   For the first time, ESGE Research Grants were awarded via the Research Champions Den where the top 8 applicants vying for a grant faced a jury of ‘dragons’ who then quizzed them, live, about their proposed endoscopic research projects. Three grants were awarded.

The Live Endoscopy sessions, which were streamed all day on Friday March 26th, were the best attended at ESGE Days 2021.   Four top European centres of endoscopy were featured: Sana Clinic in Berlin, Evangelisches Krankenhaus in Düsseldorf, Institute for Clinical and Experimental Medicine in Prague and the Erasme Hospital in Brussels.   The other top attended sessions included:

ESGE President Helmut Messman, ESGE Past President Mário Dinis-Ribeiro and the entire ESGE Governing Board would like to pass on their thanks to all involved in ESGE Days 2021!