There is a need for well-organized comprehensive strategies to achieve good training in ESD. In this context, the European Society of Gastrointestinal Endoscopy (ESGE) have developed a European core curriculum for ESD practice across Europe with the aim of high quality ESD training.

ESGE discourages the starting of initial ESD training in humans. Practice on animal and/or ex vivo models is useful to gain the basic ESD skills. ESGE recommends performing at least 20 ESD procedures in these models before human practice, with the goal of at least eight en bloc complete resections in the last 10 training cases, with no perforation. ESGE recommends observation of experts performing ESD in tertiary referral centers. Performance of ESD in humans should start on carefully selected lesions, ideally small ( < 30mm), located in the antrum or in the rectum for the first 20 procedures. Beginning human practice in the colon is not recommended. ESGE recommends that at least the first 10 human ESD procedures should be done under the supervision of an ESD-proficient endoscopist.

Endoscopists performing ESD should be able to correctly estimate the probability of performing a curative resection based on the characteristics of the lesion and should know the benefit/risk relationship of ESD when compared with other therapeutic alternatives. Endoscopists performing ESD should know how to interpret the histopathology findings of the ESD specimen, namely the criteria for low risk resection (“curative”), local risk resection, and high risk resection (“non-curative”), as well as their implications. ESD should be performed only in a setting where early and delayed complications can be managed adequately, namely with the possibility of admitting patients to a ward, and access to appropriate emergency surgical teams for the organ being treated with ESD.

Endoscopic submucosal dissection (ESD) appeared more than a decade ago in Japan as a new method to achieve en bloc resection of superficial neoplasms without any size limit. Since then, the technique has evolved greatly and shifted from the stomach to the esophagus and the colon. It expanded first to Eastern Asia, then to Europe and the rest of the world [1].

The advantage of ESD over endoscopic mucosal resection (EMR) lies in its ability to achieve en bloc resection of lesions regardless of the tumor size or the presence of fibrosis, avoiding piecemeal resection and consequently local recurrence. However, it comes with the drawback of longer procedure times, as well as an increased risk of bleeding and perforation [2]. For these reasons, the Western world remained cautious about implementing ESD for several years. One of the most important limitations for the spread of this technique outside Asia was the lack of local experts. Strategies to overcome this limitation have come mostly from Western endoscopists who individually visited Japanese expert centers and observed ESD on real patients [3]. However, going to Eastern countries to learn this technique is not feasible for most Western endoscopists. Moreover, hands-on training on patients for foreign physicians is not easily nor legally allowed either in Japan or in other parts of the world.

Therefore, there is a clear need for well-organized comprehensive strategies to achieve good training in ESD. In this context, the European Society of Gastrointestinal Endoscopy (ESGE) initiated the development of this ESD curriculum for postgraduate training to improve and safeguard ESD practice in Europe. The recommendations presented in this curriculum (Table 1) are based on a consensus among endoscopists considered to be ESD experts who are involved in ESD training and training courses in Europe. 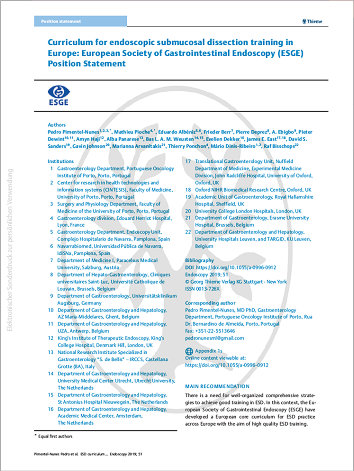