Patients with variceal gastrointestinal bleeding are encountered daily in endoscopic departments around the world. Risk factors include infectious diseases such as hepatitis B and C virus and schistosomiasis, as well as alcohol consumption and metabolic syndrome with development of nonalcoholic fatty liver disease [1]. Globally, prevalence and incidence of chronic liver disease and cirrhosis varies markedly between countries [2]. High-quality epidemiological data from the majority of African countries are lacking; nevertheless, development of cirrhosis and related consequences are a major burden for public health systems in the continent [2–4]. In Africa, mortality from cirrhosis is estimated at 12.9 to 24.2 per 100,000 person-years range and prevalence of hepatitis B virus is among the highest in the World at 6,100 per 100,000 inhabitants [5, 6].

The latest update of the Baveno guideline describes in detail how to prevent and manage variceal bleeding, as well as how to avoid recurrent bleeding [7]. The majority of recommendations in the guideline are based on high levels of evidence and many years of practice. However, some of the recommendations are resource-sensitive and may be unavailable in low-resource settings due to factors such as extensive costs, lack of sufficient health professional training and logistical limitations. 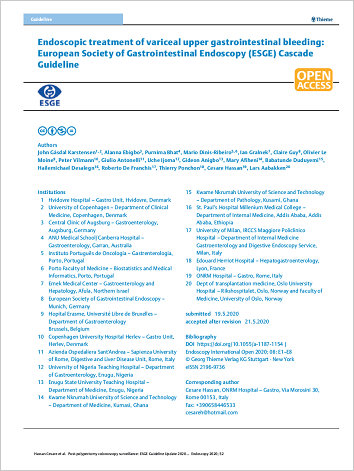