ESGE recommends to start the last dose of bowel preparation within 5 hours of colonoscopy, and to complete it at least 2 hours before the beginning of the procedure.
Strong recommendation, moderate quality evidence.

ESGE recommends the use of high volume or low volume PEG-based regimens as well as that of non-PEG-based agents that have been clinically validated for routine bowel preparation. In patients at risk for hydroelectrolyte disturbances, the choice of laxative should be individualized.
Strong recommendation, moderate quality evidence. 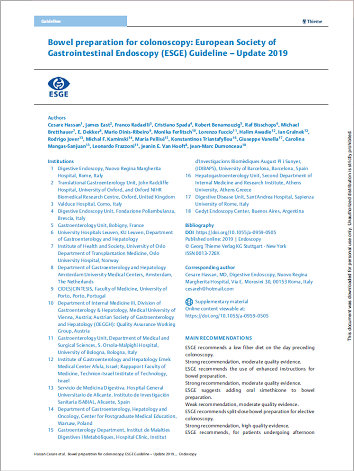